Let us help you with your Stinging Insect Issue 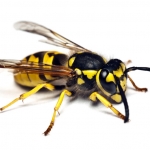 Thank you for your interest in our $129.99 Stinging Insect Offer.

Schedule your service by filling out the form. Our staff will reach out by phone with scheduling options and to discuss the type of stinging insects you are seeing. Please be sure to note an appropriate time to reach you.

Next Step – We will take the information you entered and contact soon.

Stinging insects can be a nuisance and we are here to help. Stop Bugging Me Pest Control is the local choice for ridding you of stinging insects. Our certified technicians will assess and treat the nests troubling you and educate you on ways to reduce future populations. Keep in mind if you have honey bees the technician will talk with you about options to have a bee keeper come to take the bees to another location. 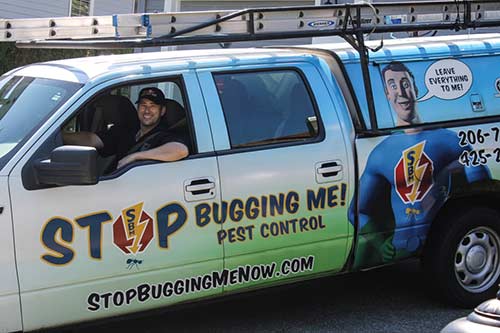 Stinging Insects cause damage to thousands of homes every year in the Puget Sound. Stop Bugging Me Pest Control is the local choice for stinging insect removal and remediation. Our certified technicians will make your home safe from stinging insects to keep them from further damaging your home.

“Stop Bugging Me came out to assess the exterior of my home for rodent activity and to place traps. Went great! Work was thorough and they came out the next week for a free follow up to clean the traps.”

“We had the perimeter of the house sprayed and cleared of spiders and webs. Stop Bugging Me was prompt, efficient, friendly, and did a great job clearing our house (which had been sitting vacant for a month and was covered in webs).”

“They were very helpful in explaining what the ants were looking for and doing, and completing the necessary repeat treatments to get rid of them. We have them come out every three months and haven’t seen any ants in the house since the summer. The technicians are always courteous.”

We have helped thousands in the Puget Sound

Our services are effective and our technicians are environmentally conscious. We offer extremely safe and effective methods of stinging insect control.

Our value is in our commitment to fix your problem. We are not a one and done company. We strive for your complete satisfaction and offer many programs for effective stinging insect control at a reasonable price.

Experience is knowing how to do the job right and doing it at a fair price. We have over 80 years combined experience in stinging insect removal and remediation which means 80 years of serving clients in the northwest.

As indicated by their name, Yellow Jackets have a black and yellow head with a patterned abdomen resembling stripes. Yellow Jackets have a smooth body and differ from honey bees by color, aggression, and size. Yellow jackets tend to be more aggressive and continue to be more so in the early fall season as activity increases in reaction to cooler weather.

Yellow jackets build nests in the ground or in hollow areas such as eaves and attics of your home. They can be found anywhere humans can be found – they particularly enjoy invading outdoor activities where sweets may be present, which can be an issue for those that are allergic to bee stings. They also eat meat so your family picnic is far greater to find Yellow Jackets than other less aggressive insects.

Bald-faced hornets are relatives of the yellow jacket. They are large in size and get their common name from their black coloring and predominately white face. Bald-faced hornets are social insects. They live in colonies that can contain up to 400 members. They are an aggressive species and fairly common in the Northwest. Bald-faced hornets have smooth stingers, allowing them to sting their targets multiple times and they also carry venom, which causes the stings to hurt, itch or swell for up to 24 hours.

Bald-faced hornet nests are found in trees, shrubs, on overhangs, utility poles, houses, sheds or other structures and are often called paper nests. These nests are constructed out of a paste created by the queen bee that becomes a papery material. Bald Faced Hornets almost have a blue hue to them and are hard to mistake if you have them in or around the home.

Paper wasp is the common name for medium – to large-sized wasps that construct nests made of a papery material. Most paper wasps measure about 2 cm (0.75-in) long and are black, brown, or reddish in color with yellow markings. They are similar to a Yellow Jacket but have a more pronounced waist and look longer and skinnier than the Yellow Jacket. Paper wasps are considered pollinators and like Yellow Jackets also eat other insects.

The nests are suspended from a single, central stalk and have the shape of an upside-down umbrella. Plant and wood fibers are collected by the wasps, mixed with saliva, and chewed into a paper-máché-like material that is formed into the thin cells of the nest. The nests are constructed in protected places, such as under the eaves of buildings or in dense vegetation. Normally a colony of several to several dozen paper wasps inhabit the nest.

Mud Dauber is another common wasp in the NW and while similar in appearance make nests of mud under eaves, deck railings, and on the undersides of structures. Mud Daubers do eat other insects so there is a beneficial side to them although if near living quarters should be removed due to stinging of humans or pets.